Find out where our longest national river springs.

The Vltava River originates as the Teplá Vltava on the slopes of Černá Hora in Šumava at an altitude of 1172 m above sea level. You can throw a few coins into it for luck.

Did you know that: the flow of the Studená Vltava rises on the slopes of Haidel Mountain near the Czech Bavarian border?

The springs are best reachable by bike from Kvilda. The road is well marked, leads along the asphalt road along the blue trail. On the way to the spring, you can enjoy the primeval forest vegetation of climax mountain spruce forests with the occurrence of a dwarf pine tree.

In the 1920s, one of the first cabins of the Czechoslovak Tourist Club in Šumava was built here. After that, the cabin was rebuilt into a prison labor camp during World War II, where mostly Red Army officers were imprisoned. When the US Army intelligence unit fought its way to this camp at the end of the war, it found 70 wretched Russian prisoners. In 1948 a monument was built to commemorate them. The cottage was demolished in 1953 because of the Iron Curtain and the monument was removed in the late 1990s.

The sculpture in the picture was created within the sculpture symposium organized by the village of Kvilda in 2004 and carved by David Fiala. 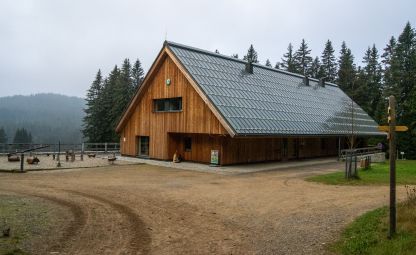