In the place of today's cathedral stood the rotunda of st. Vitus, which was later replaced by a Romanesque basilica. The Gothic building was built by Charles IV in 1344 and today it houses the Prague Archbishop. We can say that the cathedral of st. Vitus has always represented the second most important building in Prague right after Prague Castle, and was decorated by first-class Czech and Slovak artists.

The Chapter became an important spiritual place, the coronations of Czech kings and queens were held here, and the local environment is also associated with the creation of the famous Kosmas' Chronicle. As part of the exhibition, you can see not only the St. Wenceslas Crown, the St. Vitus Treasure and the golden reliquary cross, but also 139 other objects of great historical value.

Trivia:
Remains of original buildings can be seen underground and significant Czech personalities are buried in the cathedral - Adalbert and St. Wenceslas.

Notice:
The cathedral can only be visited within the guided tour of the Prague Castle Compound. Individual tickets cannot be purchased. 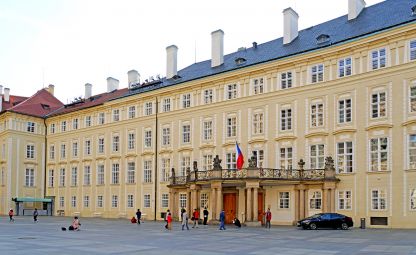